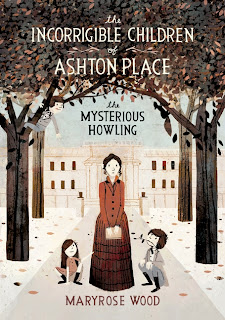 I enjoyed this fun story about little Penelope, a 15-year-old orphan who gets her first job as a governess.  This book is written for 8-12 year olds, and I think I would recommend it for the younger half of that.  It felt really short to me, and has kind of a fast ending.  But I think I've just forgotten how books for this age group are.

Penelope has recently graduated from the "Swanburne Academy for Poor Bright Females."  The title of the school alone made me determined to love the book.  When Penelope arrives, is hired and then meets the children, she is told that they were raised by wolves and only found a week ago in the woods.  She just takes it all in stride, and goes about what she was hired to do.  The circumstances are almost absurd, and her progress with the children is definetly absurd, but I think it made for a really fun story.  Some moments are completely hilarious in their ridiculousness.

For example, upon realizing that she should teach the children the evils of eavesdropping Penelope thinks to herself,
"I will have the children read Hamlet as soon as it is practical.  There are some useful cautions against eavesdropping to be gleaned from that.  In the meantime, we shall deal with the squirrels."

Another thing I like was how she is constantly remembering little mantras that she learned at school.  Sayings of Agatha Swanburne, such as,

"All books are judged by their cover until they are read."


"No hopeless case is truly without hope."

And I loved how she always thought about what she had been taught.

"Swanburne girls were encouraged to be confident and bold."


"Agatha Swanburn would not waste a moment worrying about things that couldn't be helped,"


or  "She was a Swanburne girl, through and through."

There are some moments that remind me of Anne of Green Gables.  Penelope is picked up from the train station by a quiet older gentleman, and rides in a carriage taking in all of her new surroundings.  The absurdity and kind of deadpan writing reminded me a little of Lemony Snicket.

The story is told from a third person narrator, who occasionally addresses the reader directly.  It was odd at first, because it speaks to you in present time, referring to the fact that the book is set in the past.  I think it actually works, and is probably helpful for young readers.  Here's one example,

"The truth is that one cannot go through life without being annoyed by other people, and this was just as true in Miss Penelope Lumley's day as it is in our own."

The ending wraps up one big event, but then drops a couple of clues to lead you into the next book.  I was a little surprised at that, but again I think it's because the audience is intened to be middle grades.  I'm excited to pick up the story where it left off as soon as it comes in at the library!
Posted by Kammy T at 1:29 PM