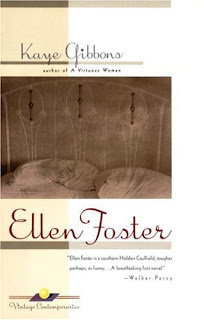 This is a short little volume that is told in a unique narrative style.  Ellen is the main character and as she tells her tragic life story, she switches from present to past, to a more recent past and around and around.  As a reader you're not sure of the timeline and how long different periods last.  There are two Christmases, but I imagine the whole story takes place over about 18 months.  It is set in the rural South, I would have thought in like the 1950's, but then there is a reference to the 60's, so my best guess is mid 1970's.

I liked it pretty well.  I think maybe it would be better suited for studying in school where you could discuss how the narrative added to or distracted from the story.  You could have students create their own timeline and piece together what is going on.  I can imagine good book club discussions about it.

The story itself is very sad.  Ellen is 10 then 11 and her mom dies first, her father is a monster and alternately treats her horribly or just neglects her.  She is of course a resilient character and works hard to make things work out.  Every family member who takes her in is bad to her.

"Everything was so wrong like somebody had knocked something loose and my family was shaking itself to death.  Some wild ride broke and the one in charge strolled off and let us spin and shake and fly off the rail."

Ulitmately, she saves herself and it has a happy ending.  In such a short time you do see growth and more understanding in Ellen.  I liked her as a character.

"Have you ever felt like you could cry because you know you just heard the most important thing anybody in the world could have spoke at that second?"

Princess of the Midnight Ball by Jessica Day George 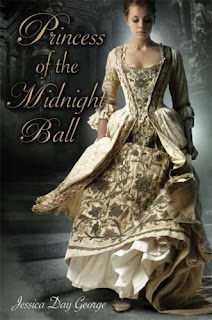 I can't remember how I found Bookshop Talk, but I've found some good book recommendations there.  They have a really good variety of books reviewed, and most of the time I have never heard of them.  One review I read was for Princess of the Midnight Ball, and Jessica Day George is one of the hosts of the website.  So I was curious, and ready for something quick and easy after The Winter Sea and Jane Eyre.

I enjoyed this book!  It is a re-telling of the Grimm fairytale of the Twelve Dancing Princesses.  All I know about the story I learned from the Barbie movie that my daughter has checked out from the library a few times.  So I don't know how much is fairytale and how much is the author's imagination.  Either way I think this was a fun, simple story.  It is written for upper elementary grades, so there isn't a lot of character development, and many of them are stereotypes.  But that's what I expect in a fairytale.

Galen is the hero of the book.  He has just fought in a war and lost his whole family.  He travels to a relative's house where he is employed to work as an undergardener at the palace.  The princesses mysteriously wear out their dancing shoes during the night, but can't tell anyone why.  As a reader, we are slowly let in on the curse that binds them.  I like how it is revealed a bit at a time.

I like Galen's character.  He adapts quickly to his new situation and does his best to help others.  "Here, though, was an intriguing new word.  A world of thinning, mulching, bandaging, grafting, and pruning--it was like building fortifications against an enemy invader."

I liked Jessica Day George's writing style, "She held the flowers to her stuffy nose and tried to breathe in some of the scent.  Only the faintest trickle of the flowers' perfume came through, so she gently stroked her cheek with the soft petals instead, savoring the exquisite feeling."

If you like fairytales, I would recommend this book.  I think my daughter will love it in a couple of years.
Posted by Kammy T at 10:45 AM 3 comments:

Labels: Princess of the Midnight Ball 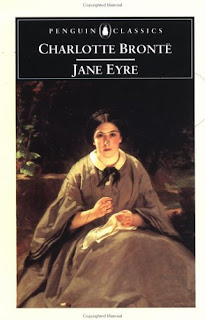 FINALLY!  I've started it three times since I saw the movie this summer.  The beginning is just so, so tragic and awful.  I haven't read this since high school, and I'm wondering how I ever got through it before.

I really, really liked it.  I've been thinking a lot about what makes something a classic, and whether I really think books deserve the title.  For this book, I think it should be studied and held up as a classic because Jane Eyre is a heroic character.  She thinks through her decisions, she chooses what is right and what she is inspired to do.  She does not sacrifice what she knows is right just because she wants something dearly.

I've  been struggling to form a review, and putting it off for over a week!

I assume everyone knows the basic story or has at least seen a movie version.  So I'm including spoilers.  I marked so many great passages as I read, which again, is a sign of a good classic.

Jane is treated so poorly by her aunt and cousins.  But I love that it doesn't break her spirit.  I love this dialogue as she stands up for herself.

"I am not deceitful: if I were I should say I loved you; but I declare I do not love you; I dislike you the worst of anybody in the world except John Reed; and this book about the liar, you may give to your girl, Georgiana, for it is she who tells lies, and not I."

Or this amazing wisdom that Helen gives her:

"But I feel this, Helen; I must dislike those who, whatever I do to please them, persist in disliking me; I must resist those who punish me unjustly. It is as natural as that I should love those who show me affection, or submit to punishment when I feel it is deserved."

(Helen responds.) "Heathens and savage tribes hold that doctrine, but Christians and civilised nations disown it."

I think that is kind of the key to life.  To be able to move past what we feel like we deserve, or are justified in feeling.

Along the same lines, "Life appears to me too short to be spent in nursing animosity or registering wrongs."

And again wisdom from sweet Helen, "Everybody Jane?  Why, there are only eighty people who have heard you called so, and the world contains hundreds of millions."

Mr. Broklehurst has got to be among the worst villains in any book, right?  I love how his power and authority is taken away after the epidemic that takes the lives of so many of the girls.
But for me the best part of the book is when she lives at Thornfield hall.  I love how Charlotte Bronte narrates, and occasionally speaks to the reader.  She explains that this is no ordinary biography, and just skips over the unimportant years.  Of course, Mr. Rochester is so rough, and so rude at the beginning.  I feel like this character has been copied and remade so many times in later fiction.

But his lines are funny, like when they first talk, "I cannot see you without disturbing my position in this comfortable chair, which I have no mind to do."

or "It would please me not to draw you out--to learn more of you--therefore speak."  Hilarious.

He also says, "I mentally shake hands with you for your answer."  Doesn't that seem like a really modern phrase?

The passages as she begins to fall in love with him are so well-written.

"The ease of his manner freed me from painful restraint; the friendly frankness, as correct as cordial, with which he treated me, drew me to him."

And, "Gratitude, and many associations, all pleasurable and genial, made his face the object I best liked to see; his presence in a room was more cheering than the brightest fire."

"Never had he called me more frequently to his presence; never been kinder to me when there--and, alas! never had I loved him so well."

For me Jane Eyre is romantic.  But it is just weird enough, that it doesn't get sappy for me.  I like the way that Jane responds to Mr. Rochester.  I don't love the way he messes with her.  His whole fake courtship with Miss Ingram seems just cruel.  Especially with Jane having to sit in the window witnessing it all.

But this description is great:  "She was not good; she was not original: she used to repeat sounding phrases from books: she never offered, nor had, an opinion of her own."  I like how Jane can't really be jealous of her because she feels above her.  I can relate to that, even if she sees Miss Ingram getting what she wants. "She could not charm him."

As a reader, I look up to Jane Eyre.  For persevering through a hard, sad, lonely childhood, and then for being self-motivated to change her working situation, but especially in refusing Mr. Rochester after their failed attempt at marrying.  He is so convincing, so logical, that I wanted her to say yes.  To feel justified in running away with him.  But then I like her more for sticking to what she knows is right.

"Laws and principles are not for the times when there is no temptation: they are for such moments as this, when body and soul rise in mutiny against their rigor; stringent are they; inviolate they shall be. If at my individual convenience I might break them, what would be their worth?"  See, she is a hero.  And this is the lesson I feel myself repeating over and over to my children and the girls I teach at church.

And then, when she hears her mother's voice!  I love it.  I do think the way that she flees is a little melodramatic.  Is it really necessary that she forget her bag in the coach?

I love Jane's dialogue with herself, and how she is so practical. "But let me not hate and despise myself too much for these feelings; I know them to be wrong--that is a great step gained;"  Totally reasonable.  Check yourself, but forgive yourself.

I love that she resists St. John and his power to guilt her into going with him.  I like that she can resist and even though it is a noble cause, realize that she doesn't have to go.  She doesn't have to sacrifice that much. "God did not give me my life to throw away."

And then the reuniting.  "Choose then, sir--her who loves you best."  Ah.  I love happy endings.  Even if the actual ending is a little abrupt.
Posted by Kammy T at 2:27 PM 8 comments: