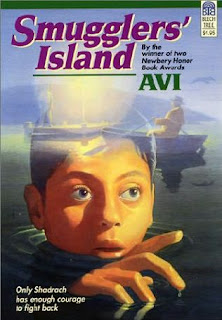 I think this is the first book I've read by Avi, but I've always been interested in checking him out because he has recieved so many awards, and turned out so many successful books.  My 11-year-old son told me several times that I had to read this book, "it is really, really good."  He doesn't often get excited about books, so I was curious to see why he liked it.  He explained that it is "non-stop action."

And I agree, there is no waiting around for things to start. This book takes place on a tiny island during prohibition.  Shadrach decides to solve the mysteries of the men smuggling alcohol on to their island.  He is fueled by the control the head bad guy has over his parents and the other adults of the island.  From the start, he is daring and finds himself in dangerous situations.  They were a little too much for me, but apparantly that's what kept my son interested and reading.  I realize it's fiction, and that it's good for young people to stand up for what is right, but again, as a mom, I don't want kids to put themselves in these horrible situations!

Also, there's this awful scene where his dad is going to follow through with a punishment, and the whole thing is really uncomfortable for me to read.  He doesn't do anything, but then his son is more motivated to catch the bad guys because he knows his dad has given up.

I think the story is clever, and has enough twists and turns to be an exciting book.  I didn't love it, but because my son did, you or your kids might.
Posted by Kammy T at 2:03 AM 2 comments: