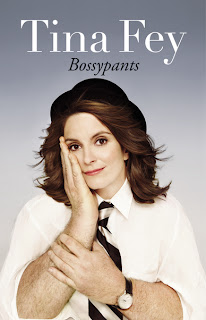 If you really like Tina Fey and think she is hilarious, you'll probably really like this book.  I did.  But it wasn't as funny as I hoped it would be.  It's a nice quick read, and had some really great parts.  It confirmed to me that she is smart and original and just super funny!

She does us the f-word, and there are some jokes that I think of as the easy way out, ie. periods, body humor, crude words, dumb responses to rude comments online.  BUT it could, of course, been a lot worse.  I still feel like she goes for the smarter punchline, rather than potty humor.  But just from a few references, it is always shocking to me that real comedic writers think that kind of stuff is funny.

I think my favorite chapter is the one titled, "Sarah, Oprah, and Captain Hook, or How to Succeed by Sort of Looking Like Someone."  It tells about the weekend that she filmed with Oprah for 30 Rock, first parodies Sarah Palin, all while preparing for her daughter's 3rd birthday.  Having watched both 30 Rock and SNL during that time, I found it fascinating!  Really.

It's shouldn't be surprising that she has some really hysterical lines in this book.  I loved that it really carries an easy narrative voice, and you laugh as you go.  I'll share a couple to give you a taste, but I don't want to spoil the whole feel if you want to read it.

"All the windows were covered, and you had to be buzzed in through two different doors.  This place was not kidding around."

"I hope you enjoy it so much that you also buy a copy for your sister-in-law."

I also loved the chapter where she explains the step-by-step process of a photo shoot.

"You must not look in that mirror at your doughy legs and flat feet, for today is about dreams and illusions and unfiltered natural daylight is the enemy of dreams."

"When people say, 'You really, really must' do something, it means you don't really have to...When it's true, it doesn't need to be said."

Because I love 30 Rock, I really liked all the behind the scenes stories about how it became a show, and how different episodes came about.

I love her non-chalant humor, and I enjoyed reading more about her!
Posted by Kammy T at 8:19 AM

I'm so glad you read and reviewed this! I LOVE Tina Fey and 30 Rock and was really excited when I first saw this book. But then I was worried it would be a little too crude, so I keep resisting the urge to read it. Now you've pushed me- I think I need to go get it. :)

YEAY!! This has been on my to-read list forever. Your post reminded me to check and see if the library wait line is down a few hundred people yet. . .